Jujube also known as Red Date or Chinese Date is originated in China and have been cultivated for more than 4,000 years. The fruit is a drupe, varying from round to elongate shape and from small gooseberry size to plum-size. There are hundreds of varieties available all over the world.

The Indian jujube is called as Indian Plum or Indian cherry in English, “Ber” in Hindi, “Badri” in Sanskrit. The Tamil name is “Elanthai Pazham” (இலந்தை பழம்).

The immature fruit is smooth-green, but as it matures more, it changes to Greenish orange and when it fully ripe it becomes dark redish/brown and wrinkled.

The fruits grown in North India are bigger than the one we get in South India, particularly in Tamil Nadu. 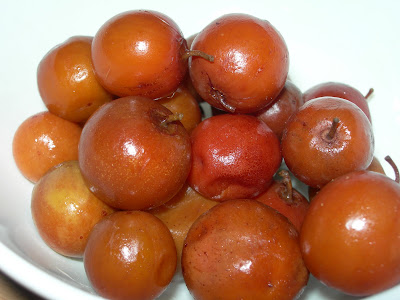 In Tamil Nadu, the fruits are in small round shape and mostly sold by vendors near the schools. Children eat these along with chilli powder and salt.

The ripe fruits are generally consumed raw, but are sometimes used for making candies, pickles and used in desserts. Elantha Vadai (The fruits are dried in the Sun and the hard nuts are removed. Then it is pound with tamarind, red chillies, salt and jaggery. Small vadas made from this dough and again dried in the Sun) is one of the famous candies which we get in Southern Tamilnadu. Now this vadai finds a place in City’s super stores also.

Medicinally, jujubes have been used to treat nerves and as a cure for insomnia.

It cures stomach-aches, respiratory problem, throat infection, urinary inflammation and constipation. It is helpful in liver troubles, asthma and fever.

They are equally effective in the treatment of diarrhea, dysentery, gout, ulcer and rheumatism. A teaspoonful of powder of dry fruit stops excessive menstruation.

Irrespective of the medicinal value the fruit has, it is not much liked by all. But it will definitely bring in our School Day memories.