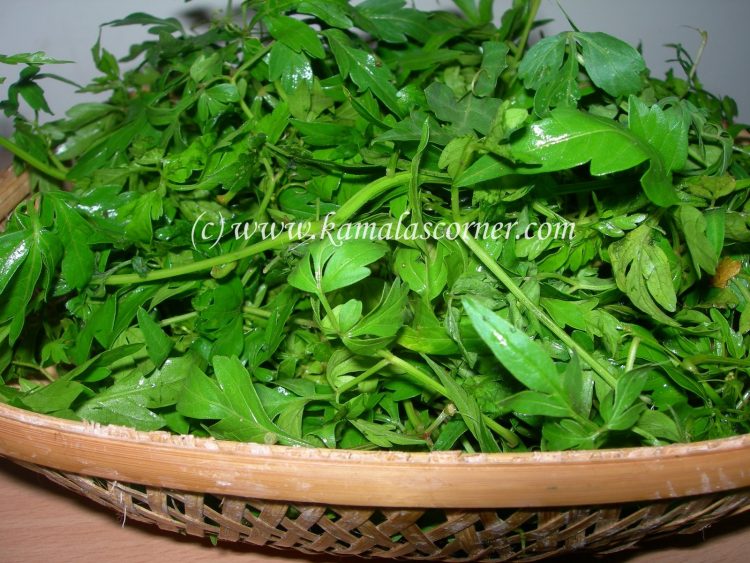 Mudakathan Keerai in Tamil is known as Indravalli in Sanskrit. Its botanical name is Cardiospermum halicababum and belongs to the soapberry family.
It is a woody perennial climbing plant with large ornamental seed pods that resemble balloons. Hence it is called Balloon Vine in English.
Originating from Tropical Asia, Africa and America, it is named as weed in some countries because of its fast growing nature and obstructing sunlight to other plants.
But in India, it is not growing in large (it grows only near river beds and other wetlands) and it is used as a herb in Ayurvedic and other Indian medicines for treating Gout , Rheumatoid arthritis, Skin diseases, Cough, Nervous disorders, Piles, Muscle wasting, Dysentery, Diarrhea, etc.
Even though it has lot of medicinal values, it is not used in regular cooking because it is rare to find and tastes slightly bitter. However, in Tamilnadu, you will get this keerai fresh in the morning hours in the vegetable market.
To reduce the rheumatic pain, Kashayam is very effective. To make Kashayam, put a handful of Mudakathan Keerai along with two cups of water, a tablespoon of jeera and a pinch of turmeric powder in a vessel and bring to boil. Allow to boil for five to ten minutes and strain it.
Adding this keerai to one’s diet at least twice a month will definitely help in curing joint pain.
It tastes slightly bitter when fresh, but when cooked, you will not feel the bitterness.
Normally, people make dosa with this keerai.
Recipe for Dosa:
Mudakathan Keerai Dosai
PS: Mr Devarajan, one of our readers, informed that in Khadi Store, “Mudakathan Keerai pickle” is available. Those who are interested can try this also.